This morning I was unexpectedly inspired by a pair of feet walking past my cube at work!! My coworker Alison is sporting the cutest beige wedges. They caught my attention (via peripheral vision!) because of the lace detail around her foot. 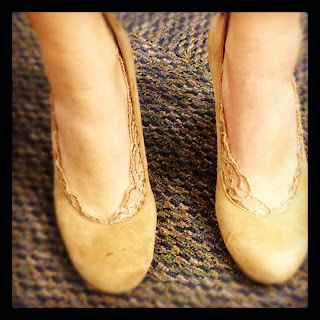 As I complemented her she shared that the lace is not part of the shoe, but rather a fancy pair of peds she found at DSW! I tried to find them on the DSW website but couldn't find the same pair. This lace toe Jessica Simpson pair is a nice alternative though! Amazon proved helpful and returned this cute Calvin Klein design... 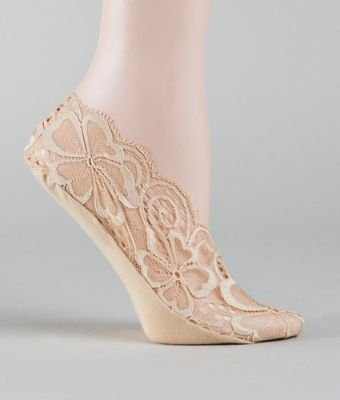 The great thing about this look is that it's versatile and can go with more than one shoe! And it just goes to show that a little flair can go a long way! If you're one of the people that feels more comfortable wearing hosiery with your heels (like Alison) this is a GREAT option to consider.
Posted by Caitlin at 11:56 AM 3 comments:

I know this post is super delayed, and I have been trying really hard to stay within the "three to five posts per week" rule but starting on a new project and fighting off a cold/flu thing hasn't left me with a whole lot of extra time. (In addition to building marketing materials for a convention, making my tutu for the trapeze show in 3 weeks, baking homemade chocolates for various groups of people!)

Moving on... this past weekend was so much fun! Saturday was Ross' 30th birthday and I had a fun-filled day of adventure planned for us. All Ross knew was that we would be spending the day in Richmond. He didn't learn about our itinerary until he was eating the spinach, swiss, & 'shrooms omelet and hashbrowns I made for him! (PS - if you ever make hashbrowns,  I highly suggest using a mandolin to slice the potato.) 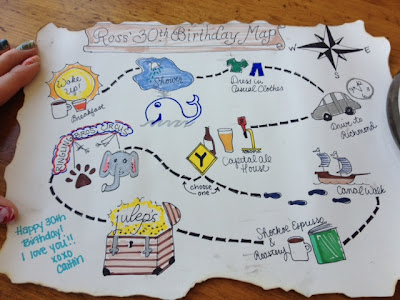 The above birthday card/map was SO well received, Ross has since decided to frame it! It even got over 15 likes from friends on facebook and prompted quite a few reactions in person. While I was making this last week Ross asked me what I was burning at the kitchen sink (the edges of the paper) but I told him "don't worry about it!" Also, this might be applicable to a handful of readers... my friend asked how I managed to make such an elaborate card when we live together? Ross was working at the kitchen table, and I told him "I'm going to make your birthday card now so don't come near me!" :) 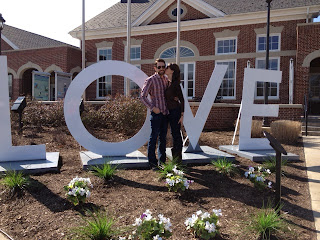 The weather forecast for Saturday was a high of 58 degrees (our car's thermometer actually read 61 for a while) and it seemed that everybody else had a similar idea to get out of the city. I-95 South was so crowded it took us about two and a half hours to get to Richmond - a ride that should be less than two hours. On the way we stopped at a rest stop and showcased the Virginia slogan "Virginia is for lovers." - we even shared this on Twitter!!

Our first stop in Richmond was Capital Ale House for beers and lunch, but mostly beers. It was American Micro Brew Saturday which meant all of the domestic draughts were on sale! Ross and I each tried two different beers, one local. The winner for best name was Ross' second choice; "Old Leghumper". Yup, that's right, leg humper. 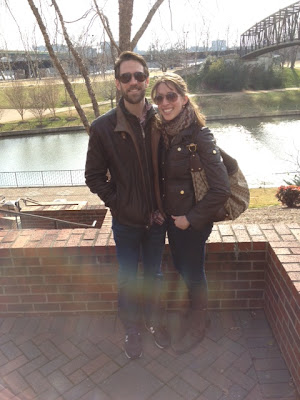 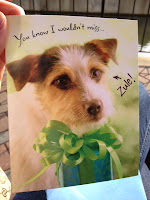 After lunch and beers we strolled along Canal Walk - a really quaint and pretty path along the canal. The weather was so beautiful, we had a great time soaking it all in. Throughout the day, at each activity, Ross got another birthday card, culminating with his gift in the card at dinner! His card on our walk had a picture of a little Jack Russell Terrier which was appropriate because Ross has a fond affection for my Dad's dog, Zule.  Look how cute the pup is... 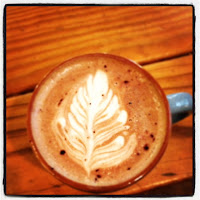 We rested up at Shockoe Espresso & Roastery on the slip. This is at the end of canal walk (or the beginning, depending where you start) and there is a cute collection of shops and restaurants. Ross went with coffee and I opted for a mocha which was really rich and delicious. The latte art was a pleasant surprise as well. While at Shockoe we rested up so much I actually fell asleep on the couch! So we went back outside to wake back up and window shop.

After a quick change in the car (I wasn't going to wear fancy clothes all day) we drove over to dinner at Julep's. This is such a divine southern restaurant that I would recommend to anyone and everyone!! The Aunt Ruby martini was simply delicious, and Ross' JLI offered a nice southern twist on the traditional Long Island. The food was all very well prepared and absolutely fantastic. We finished every morsel of each course. Here's our dinner plates; crab cakes on top, roasted duck breast on bottom. 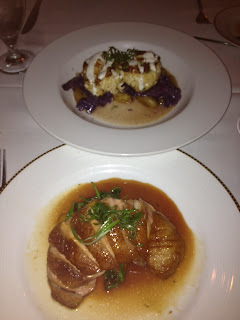 Before we hit the road for the next hour-and-45-minutes I had one last surprise... SLIPPERS! Our feet were very comfortable and warm for the ride home. Much better than 4 inch Jimmy Choos if I say so myself.
Posted by Caitlin at 2:13 PM No comments:

Ross and I had a relaxing evening together for Valentine's Day. We kicked things off with a tasty appetizer and a glass of wine. This snack is a twist on one of our favorite flatbreads from the DC restaurant Founding Farmers. From top to bottom you've got;

To round out our night we decided to watch a lighthearted film and settled on Rio! We really enjoyed it and had a fun time guessing which actors were doing the voices! While it was on I decided to take advantage of the time and paint my nails. I settled on the water marble nail art method (see DIY post here) in a rainbow of colors... inspired by tonight's trapeze class theme; tie-dye!

I recently stumbled across homemade chocolate recipes and was instantly inspired! This past weekend I made a dozen chocolates; half filled with peanut butter and half filled with caramel and pretzels. I gave a few to my friends at dinner on Sunday night. Then I decided to make another dozen for my teammates last night, in celebration of Valentine's Day! PS - these will also serve as tonight's dessert when I make chicken scapariello for a valentine's day dinner at home! 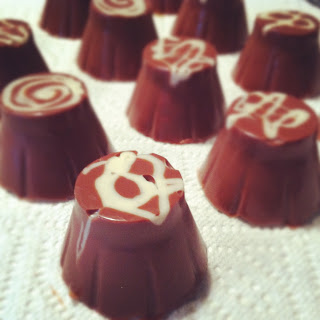 I used a candy mold to create the cup shape, you can also use mini muffin tins with mini liners, or a regular muffin tin with cupcake liners but only use a bit of chocolate (this will more closely resemble a Reese's Peanut Butter Cup).

Here are a few pictures of the process, and the steps in case you're interested in making these as well!

no heel no hose 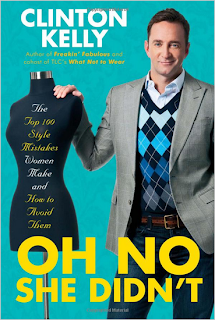 In his book "Oh No She Didn't" Clinton Kelly remarks on all of the fashion, trend, and cultural mistakes women commonly make. It's such a fun, light read - you'll laugh out loud, I promise! I got this book as a gift from Ross' mom for Christmas and it's been sitting next to my bed ever since. It's my go-to book for a few quick minutes of light reading before turning out the lights.

Last night's read brought me so much enlightenment, I have to share it with you all here. "No heel? No hose!" Thank you, Clinton Kelly, for finally clarifying the rules of shoes and pantyhose. This point was embedded in his comments about reinforced toe hose with sandals... BIG no-no! Never wear a reinforced toe with open-toe anything. EVER. Although, if you have a peep-toe it is OK to wear pantyhose - as long as it's a pump! If you're rocking a sandal, mule, or slingback... DON'T EVEN THINK ABOUT IT!

Here are some examples of yays and nays, a la Google search...


Here, however, I must plug for one of my FAVORITE products that works around this issue, for the most part; toeless tights. No, not the tights that stop somewhere on your calf or ankle... these have a thong at the bottom to go through your toes like a flip-flop so it covers your foot! I was lucky enough to stumble on a few pairs at Century 21 stores in New Jersey, though I'm sure any department store's hosiery section would keep these in stock.

The seam tend to ride up on my foot so I don't wear them with very strappy sandals because you would see the end of the tights. I prefer to use theses with shoes that cover the top of my foot.
Posted by Caitlin at 11:44 AM 5 comments:

News of the recent Department of Health and Human Services (HHS) mandate caught my attention this morning when sound bites from Morning Joe traveled down the hallway from our TV. This post isn't about my political or personal views on the matter but rather sharing that this has been a topic of interest among a number of different groups for quite some time.


Recently I started an Article Club with a few friends. The idea behind Article Club came from the blog A Cup of Jo. The purpose of meeting is to connect and network among a group of young women with similar interests and lifestyles. We all have really busy lives and don't have the time to commit to reading a book each month, instead we choose one to two articles discussing relevant topics of interest. Sometimes the themes can be controversial and the conversations that develop can be heated yet polite - all thanks to strong personal views, which makes a much more interesting evening all together!

December's article club featured a piece from The Economist titled "Nuns and Contraception: Praying for the Pill". You can now imagine my instant intrigue surrounding the HHS mandate.

Rereading The Economist's article this morning brought to light a foreshadowing of the mandate... "The church has already won an exemption for women who work for a church, but it also wants to keep coverage from women who work for any Catholic institution, even if the women in question are not Catholics and the institution has a secular purpose, such as a school, say, or hospital."

Author C.H. goes on to cite studies showing correlation between menstruation cycles and cancers of female reproductive organs. Nuns specifically, due to their celibacy, have more menstruation cycles than child bearing women and thus run a higher risk for developing cancers, particularly breast, uterine, or cervical. But where does the pill come in? Regulating hormone levels through oral contraception shows significant decreases in the risks of cancer and mortality rates.

It's an interesting argument and a fine line to balance between Church and State. I'll certainly be following the topic to find out how it develops and settles.
Posted by Caitlin at 10:48 AM 3 comments: 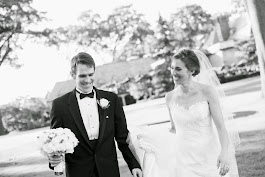